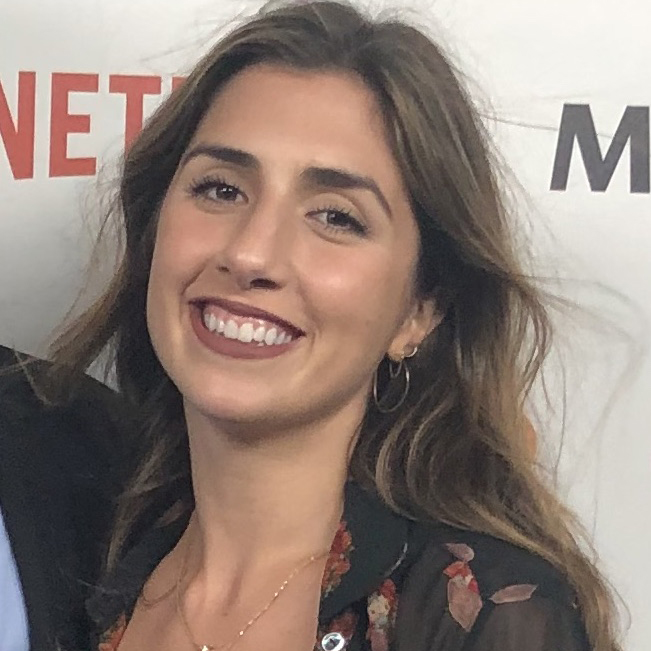 Before binge-watching television was trendy, Anastasia Puglisi grew up watching hours of Law & Order with her mother in Connecticut. While studying film at Fordham University, Anastasia told her friends that she would know she’d “made it” when she got a job on Law & Order: SVU. Today, only six years out of college, Anastasia is the Director of Programming at Wolf Entertainment.

We sat down with Anastasia to discuss her position at Wolf, which is different from one day to the next…but that’s what she loves about it. Check out what she had to say below.

Q: Tell us a bit about your role at Wolf?
A: I am the Director of Programming, so I am involved in the development, creative, and production of all the scripted shows. It’s a very small executive team so we all get to wear a lot of hats, which I love. It gives you the opportunity to use your brain in various ways throughout the day, and with the volume of shows, there’s a lot going on. I work closely with both networks and studios, I work with our producers on set. I work with our writers…it’s a little bit of everything.

Q: Your story is unique in that you have achieved so much so quickly. What was your trajectory like?
A: My background is in freelance production. I started working in New York in production, working my way up to a production coordinator on a few low budget features. Right before I started working at Wolf, I was working on an NBC pilot, and I was able to connect to NBC’s HR. I just kept banging on as many doors as I could, until something opened. Through HR, I landed a job as an assistant on Derek Haas’ desk (Chicago Fire Showrunner and Executive Producer) five-and-a half years ago. At the time he was writing on both Fire and P.D., so I got to immerse myself in the entire One Chicago world, which included seeing the launch of Chicago Med. From Derek’s desk I worked my way up, and I’ve been plugging along ever since.

Q: Your work has you wearing multiple hats. What are you focused on right now?
A: The first thing I do every morning is check my emails. Our number one focus is getting back into production in a way that is COVID compliant and completely safe and healthy for everybody on set. I’m working with the producers who are actually on set of each show to implement COVID protocols and dealing with the procedures that have been put in place by Universal, by Wolf Entertainment, by the unions, by the DGA, SAG, and the local governments to make sure we are doing absolutely everything in our power to make this transition back into production safe and smooth.

In addition to that, we are launching a new show, Law & Order: Organized Crime, which is featuring the return of Elliot Stabler (Chris Meloni), which we are all thrilled about. We are working on developing the first episode and what Stabler’s return looks like. That is a huge part of what’s going on right now, in addition to getting back creatively into the shows that we have returning.

Q: As the Director of Programming, what is your involvement in the casting, writing, and the post-production processes?
A: In terms of casting, we (Dick, Peter, Arthur Forney [Executive Producer on all shows and Head of Post Production], David Brownfield [Executive Vice President of Programming]) get involved only when casting major recurring characters, guest cast, or series regulars. It starts with getting selects from our casting director, which come via a link either in the form of an audition or a compilation of clips of an actor’s work.

The writers of all the shows, except for SVU, are on site with us at Universal, so prior to COVID, I was with the writers everyday. At the beginning of each season, showrunners pitch the executive team the broader thematic elements of the season. We talk about larger story arcs for all of our regular characters on the shows, and then they pitch the broad strokes of each individual episode. We give notes, and then we get an outline for each episode, followed by a script for each episode, and we give notes on each of those.

Q: How do you see the balance between the creative elements of your job and the more administrative aspects?
A: It’s a day-by-day thing. Some days require all administrative-type thinking, and then some days are all creative thinking. I always wanted to be a producer because I feel like I am split brained; I’m equal parts creative and equal parts business oriented. I feel very lucky because I found the sweet spot, and I get to do both. But every show has different needs. Every producing team has different needs, so it’s basically just figuring out how and where I can be most helpful.

Q: What do you find to be the most challenging part about working on as many TV series as you do?
A: The volume of shows is very challenging, but I also think that’s what makes it the most exciting because we are so fortunate to have the amount of shows on air that we do. I’m one of those people who thrives when I look at my to-do list and think, “how am I ever going to get all of these things done?” That’s when I go into turbo mode and plug through everything. That’s my favorite way of working. Even though it’s challenging, I think that’s the way that I get to produce my best work.

Q: What sticks with you the most from your journey with Wolf Entertainment thus far? What’s the big takeaway?
A: Quality. The most important thing to all of us is quality in storytelling and in production. It’s of the utmost importance to all of us to be proud of what we put on screen and the messages that we share. We are a team of perfectionists, and we are not afraid to admit when something isn’t working. We will go back and reshoot something to make it the best version that it can be. It’s been an incredible lesson to learn, that nothing is ever worth compromising quality.

From a creative standpoint, the most exciting thing I’ve learned at Wolf from a storytelling perspective is that nothing is ever black and white. From the very first episode of Law & Order, the storytelling exists in the grey area, highlighting the complication of real life. Nothing is ever 100% good or 100% bad in life. Life is messy, and all of our shows do an amazing job of highlighting that. Stories and characters are so much more interesting when they exist in this middle ground of good/bad, true/false, and I’ve learned so much from the talented group of filmmakers around me.

And of course, something that makes Wolf so incredibly special and unique is the commitment to loyalty. I’m basically the newbie of the company, having only been there for five years in comparison to some of my coworkers who have been there 30+. It is so inspiring to be in an environment of people who give their all every single day and value loyalty above all.