Chad Saxton has been a part of our Chicago P.D. family for nearly a decade and is still experiencing career…
Menu

Chad Saxton has been a part of our Chicago P.D. family for nearly a decade and is still experiencing career firsts. In this week’s newly released episode, “Still Water,” the Co-Executive Producer and Director checks ‘underwater stunt’ off of his list.

We caught up with Chad about the complex details involved in executing  P.D.’s most epic stunt to date, his history with the series, and more.

Q: You have a long history with Chicago P.D. as Co-Executive Producer and Director. How did you get started at Wolf Entertainment?

A: I started on P.D. as an Assistant Director so I’ve been on this show since the beginning, which is a different perspective. As I was assisting Mark Tinker and Eriq La Salle, the show’s former Executive Producer/Directors, I began understanding the story and the life of what this show’s trying to portray. My input on the storytelling level made them realize my potential. Eric eventually pushed me forward into directing and from there it took off.

Q: How do you determine which episodes you are going to direct?

A: Since I’m overseeing the show, it’s standard that I’ll direct each season’s first and last episode. Those are typically the most important– where the story picks up and finishes. If I’m not available, I think structurally about the scope of a season and decide which director is best suited, per-episode. Thankfully, there are directors I know I can trust, so I find out availability and build a season from there.

Q: What does your day-to-day look like as a Co-EP when you are not directing an episode?

A: Outside of director meetings, I’m in daily contact with Chicago P.D.‘s Showrunner, Gwen Sigan, and Co-Producer, Terry Blyth– everything from ongoing logistics to post-production and cuts. It really varies depending on what episode’s shooting. If there’s an action sequence and a director’s not super strong in action, I’ll be on set. Sometimes, one of the actors will want me to be there as a secondary guide during an emotional scene to make sure they’re hitting the right spot.

A: It’s funny. Three years ago, when I was Assistant Director, we were on a tech-scout and Gwen asked, ‘Have you ever wanted to shoot underwater? Do you think it’s possible?’ I was all for it. It’s very common, and I thought it’d be really fun. A line-producer at the time overheard us talking about tank work and answered, ‘Oh no. It’s definitely not feasible.’ From there, we just dropped it.

Now that Gwen’s the Showrunner, and I’m Executive Producer, she asked again– ‘I want to drive a car into the river and do a big underwater thing. Should we do it?’ I said, ‘Yeah, let’s do it.’ Her next call was P.D.’s new line-producer, Craig Cannold. After he looked into the financial side, we started to see what was possible. The first plan was to bring a tank to the studio and shoot.

Chicago Fire used one last year for their finale, but that was a capsized boat so the tank was too shallow. We would need to go deep. We used the same company and, right when we went to pull the trigger, they got a movie. Once they weren’t available, it became complicated. Craig figured out that the next best option was shooting the underwater work in LA. 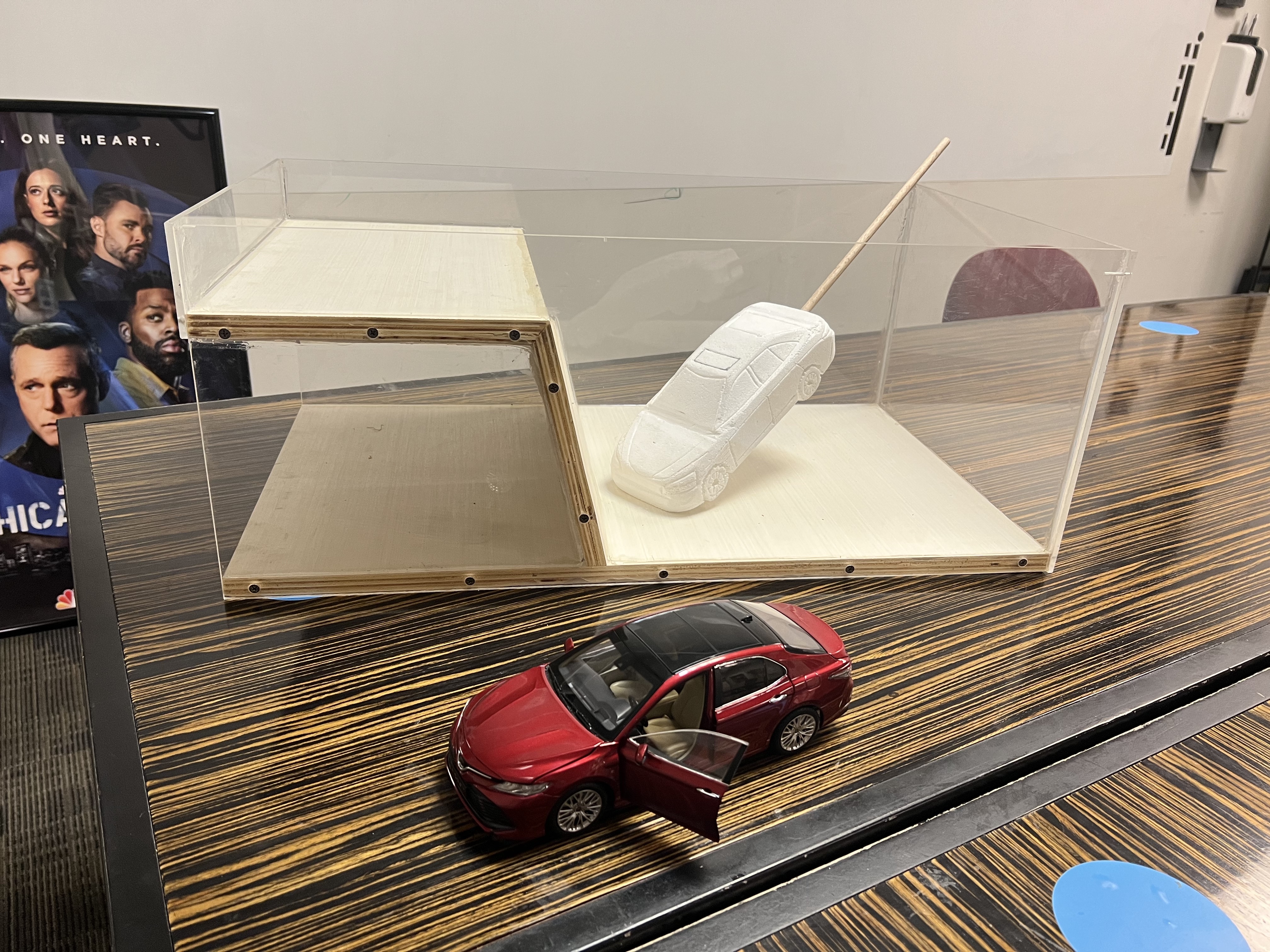 Richard White, our First Assistant Director, did a great job of breaking the rest down into pieces. For our shallower, surface-level sequences we built a small tank on stage, called ‘the pond,’ that was only four or five feet deep. Then, on location we had stunt doubles go into the water and Tracy Spiridakos, who plays Detective Hailey Upton, go up to the edge. We shot on the 7th and 8th of January in Chicago. That sequence, where the car approaches the bridge and almost goes into the water, that… that was cold. When she’s shown jogging, it was between 5-10 degrees. The next day it started in the twenties.

We did a few takes with the stunt doubles, but you can’t last long in that water. We had warm water heaters, dry suits, rescue boats– there was quite an elaborate setup to make shooting in the Chicago River in January possible. The water was freezing– actually frozen over. We had to have barges drive up and down the river to break up the ice. There was no way to safely get a person into the water with chunks of ice falling around. Certainly quite a process, but it all worked out.

Q: When you read a script with a big stunt, as a director, what is the first step in bringing that to life?

A: Each director is different. I read the script multiple times to understand the intention behind each scene, then try to visualize how I would shoot it. After we had a meeting deciding to do the stunt, I sat with the storyboard artist. Once we broke it down into the most basic terms, we got more creative about building the set around the tank. Because it’s such a technical process, it’s harder to keep the emotional content the same for actors. 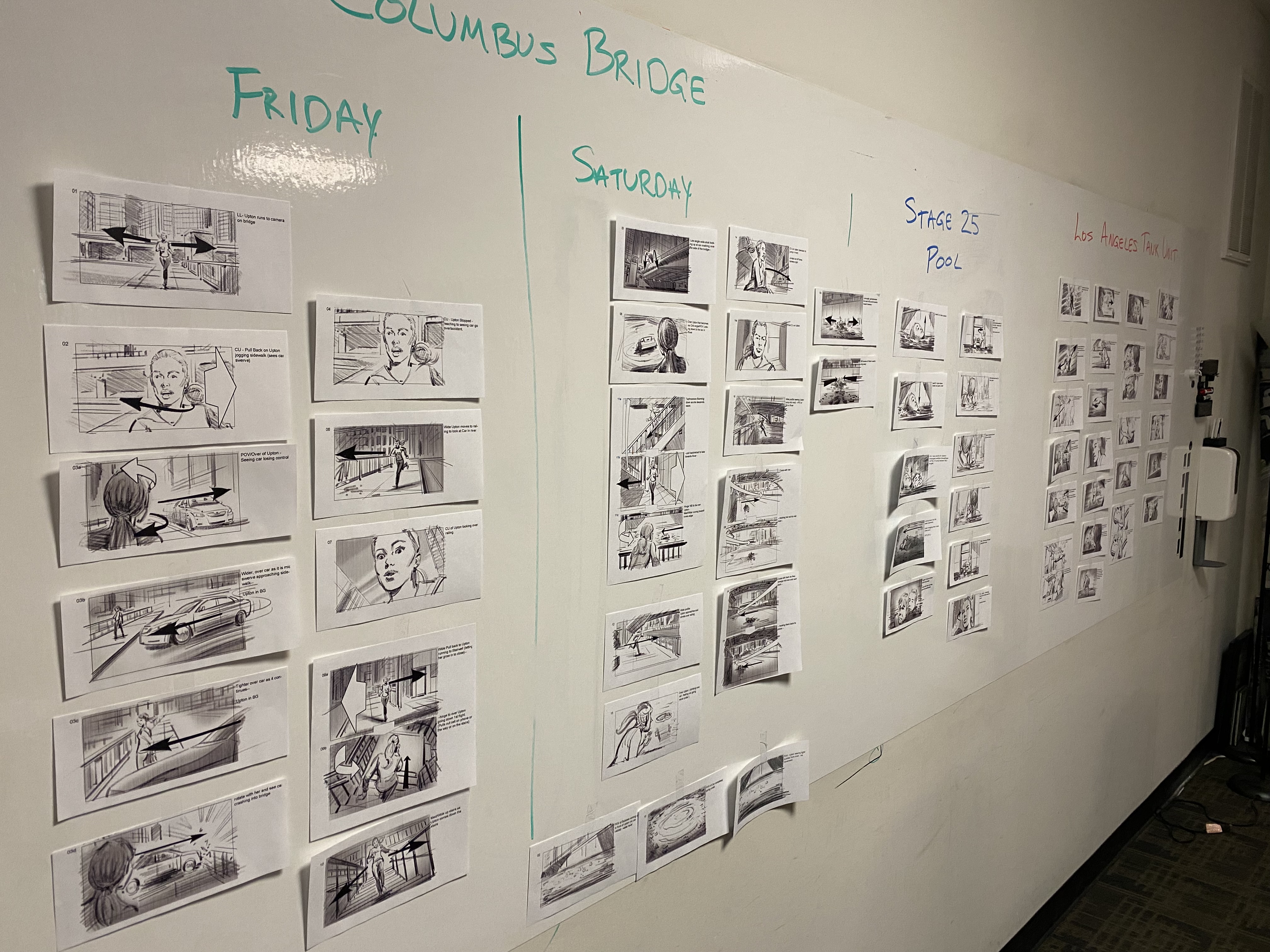 Q: What do you think is harder to direct, a big action sequence or a more emotional scene between actors?

A: They’re both challenging. If an actor is onboard, it’s totally easy to shoot something emotional– allowing them to play and feel. It’s making the camera record that amazing moment, whereas, with shooting action sequences, it’s very technical. It can be monotonous and tiring because you’re doing that so many times. There are more set-ups, more takes, more cuts, and you have to maintain the story’s thread the whole way through. If I had to choose, I would say emotional.

Q: Do you have any episodes or scenes that stand out as your favorites?

A: Last year’s season finale, I believe it was a two-parter, was a really fun and energized roller coaster. There were some parts with Burgess, played by Marina Squerciati, that didn’t make the air solely because of time restrictions. It was amazing acting and brutally horrible because she was shot, trying to survive. But overall, that was my favorite episode to work on.

Season 7, Episode 11 called “43rd and Normal” was one of the first episodes I did on the show. There’s one scene where Burgess sees a sonogram after going to the doctor. I shot it in a really long dolly-push where I was really trying to make it all about her in a very different way. I gave Marina a note, ‘Give me a hair of a smile.’ She was like, ‘that’s the first time anyone’s told me to be happy about this, I think that’s a really good idea.’ It really changed the scene.

Q: When Burgess is looking at her sonogram…that sonogram was actually your own child’s! Did you know that we were going to use that, or was it a surprise?

A: I had no idea that was going to happen. I randomly landed that episode. I talked to the prop master and was like, ‘Hey, you know it’s kind of interesting timing. My wife’s most recent sonogram was the exact amount of weeks we needed for the scene.’ Other than that, no one knew my wife was pregnant. I kept it secret for months until the show aired.

Q: What advice would you give to aspiring directors?

A: The number one thing is knowing that the industry in general, no matter what role you’re going to play, is tough. Persistence always wins. Eventually you will move forward and upwards if you’re really focused. If you push through those times where you don’t have the income, it’s all about trusting and believing you can last.